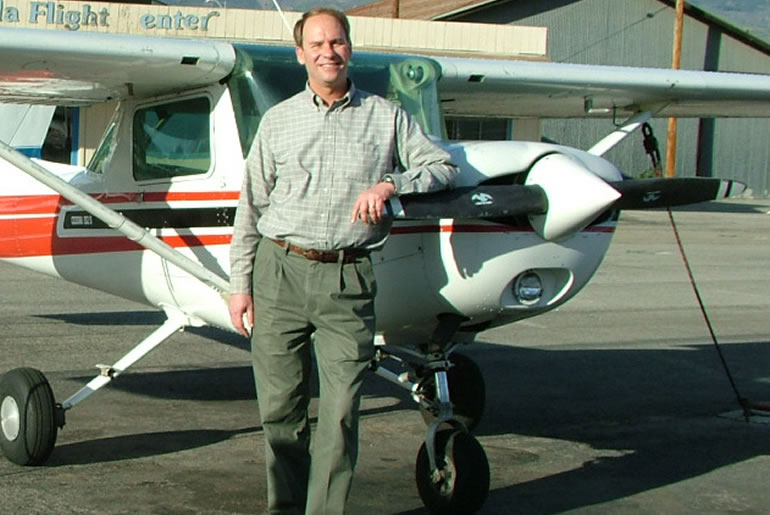 Who knows why we make the choices that we make? Some choices are forced upon us, others are the result of options presented to us and some are somewhat random and we just go for it. I’m not really clear as to what motivated Tim Patrick to choose to learn to fly and I’m not sure he is either, but he did, and I’m glad that he did. Choosing to learn to fly lead  Tim so far out of his comfort zone that it was two weeks before he even knew whether he was “on foot or horseback”.

Tim made the decision to study for and take the Private Pilot Knowledge Test before he had ever been at the controls of an airplane. He passed the test with a score in the 90’s, bought a headset and scheduled his first lesson. Now that I look back on this it was a clear sign as to the type of person that I would be sharing the cockpit of the Cessna trainer with. He was a man that had made a decision, was a man on a mission that he later admitted was stretching him to the limit. We flew almost every day until he soloed on the 8th of November (43 days after his first flight). Tim’s personality and personal style was very regimented and refined based on almost fifty years of perfecting “his world”.  Learning to fly requires a reordering of our thinking, polishing our hand-eye coordination, navigating in a 3-dimensional world, and learning a new language. Boy, did we have fun!

There were days when, I’m sure, that he wanted me to just jump out of the airplane and let him figure it out on his own. In reality he was figuring it out on his own as my role was to just make sure that he had enough feedback to achieve the desired outcome and to keep moving him forward.  Day after day we’d meet at the airport and each day he grew more confident and competent as a pilot. I will never forget when Tim checked in with me while at one of the stops on his solo cross country. He was jubilant and for Tim this means he was smiling broadly (I could hear it in his voice) as he is very reluctant to show how he really feels and I loved to try and make him laugh.

As 2009 was giving way to 2010 it was clear that Tim was ready for the Private Pilot Practical Test so we scheduled it for January 5, 2010 (about 3 1/2 months from the day we started). The reason that I share the time it took to complete this journey is that when Tim walked through the doors of CP Aviation on September 21st he was sure that he would be a pilot in 60 days. Not impossible but a challenge that must be measured against a myriad of factors that surround each of us as we endeavor to meet any new challenge. It took more than 60 days but who cares?

On the morning of January 5th Tim had one more hurdle to clear; the Private Pilot check ride. This was not going to be just a plain old vanilla check ride because the FAA would be sitting in as the Designated Pilot Examiner was also to be reviewed. When Tim was presented with this option he was more than willing to be the person that Dennis Renzelman, DPE would test during his review by the FAA. Needless to say all went well and Timothy Patrick ended this day a Private Pilot.

There is nothing more satisfying than participating in the process of helping someone achieve a goal. It is why I teach and why I am so grateful to those that allow me to share their adventure with them. Thank you Tim, it has been an honor and a privilege to watch you grow wings.

One last comment. Tim has a son serving in the Middle East with the United States Marine Corps (L/CPL Taylor Patrick) and having been a Marine myself this provided us with an additional bond. Tim shared with me that he was not going to tell Taylor about learning to fly until he achieved his goal. Tim is very proud of his son and the decision that he made to join the Marine Corps. It is my hope that Taylor will read this and through these few words have an opportunity to share in his Fathers’ extraordinary accomplishment. Semper Fi