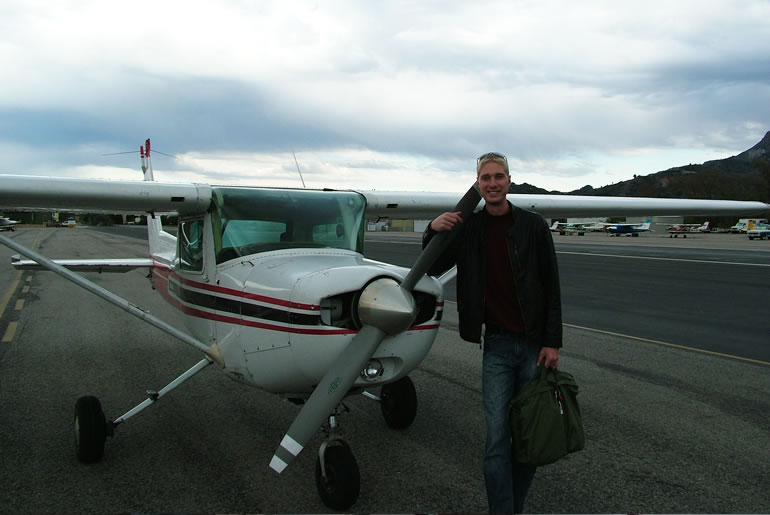 Saturday December 17, 2011 started out as the second day of what we call “wind event” days as our tip of the hat to Santa Ana winds that blow here in Southern California. The plan was to have Evan Zalesak solo on this day but I had told him not to count on it as the wind may be a factor. He concurred but nonetheless his family had decided that they would come to the airport just in case something changed. As we began the winds were still too strong for a solo but good for a solo tune-up. We had performed a number of landings and as to be expected Evan was a bit nervous and I was nit-picking his performance to squeeze the best out of him. It was clear that Mother Nature had decided that today would be the day and the winds had calmed considerably.  As we were taxiing back to Runway 4  I asked him if he had any comments about his performance. He looked at me and said it was hard to concentrate because I was talking. I smiled to myself because this was the sign that he was ready to solo.  Needless to say, he performed well and after completing seven landings celebrated his accomplishment with his family.

The rest of this story has to do with Evan’s motivation to learn to fly. About a year ago he signed a contract with the Air National Guard unit based at Point Mugu with the goal of becoming a pilot in this unit. Having aviation experience is an important part of achieving his goal as is going through airman basic training at Lackland AFB in San Antonio, TX. It was important to complete his training through solo as he leaves for his training in January. 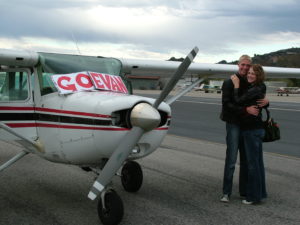 A hug for a job well done

Also, budgeting his resources for the training was very important as would be expected of a recent college graduate and new father. To accomplish this goal we started his training in a Redbird simulator in which he spent his first five hours before getting into the Cessna 152 for the balance of the training to solo. As his instructor it was very encouraging to see how well he performed during his first flight in the airplane and I’m sure that the simulator contributed to achieving his goal of soloing after only 15 hours in the airplane and saving money in the process. Congratulations Evan and thank you for sharing this part of your journey with me.