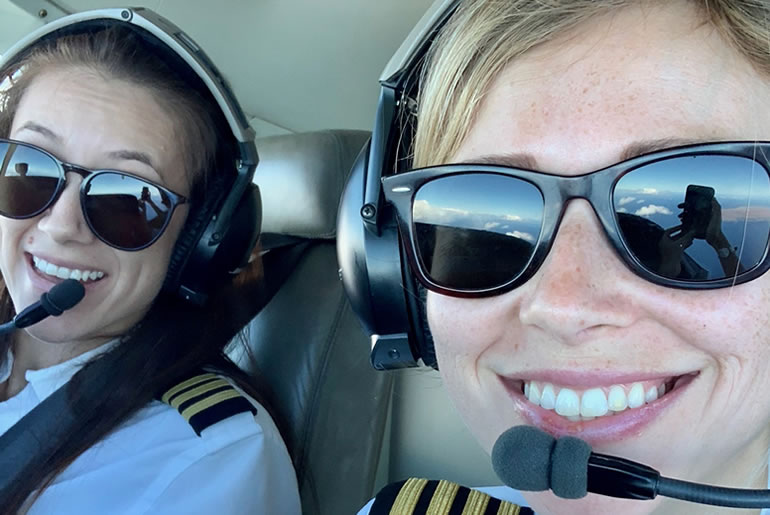 You learn how to fly, you get an instrument, commercial and a multi-engine rating. You have less than 500 hours in your logbook. Then what? Go to Hawaii and interview for a job, right? Not many people that I know would do this. But what do I know? Catherine did exactly this and as chance would have it, she was offered a position as second in command flying Cessna Caravan’s. During the interview she was told that she needed to improve her skills flying a G1000 instrument suite and that she needed to make it happen ASAP. So what did she do?

She flew home California to figure out a plan to master the G1000, improve her instrument skills and then go back to Hawaii in less than two months.

This is where our story begins.

Catherine came to my office around Thanksgiving 2017 and shared her challenge with me. We put together a plan, based on guidance that I had received from her potential employer and to enhance the skills that she felt needed some attention.

All of our training together was conducted in a Redbird FMX AATD with a G1000 avionics suite. Catherine was totally focused on success. She not only needed to master the process and procedures of the G1000, in the instrument environment, she also needed to memorize the callouts and flows required as being part of a two pilot crew. The beauty of simulation is that we were able to accomplish this in the environment in which she would be flying, same approaches, airports, terrain. It was a challenge for her and fun for me because this was more than teaching, it was making it real for her. She shared that “I was pushing her to her limits by moving her out of her comfort zone.” She later shared that she was not going to “sugar-coat her feelings-there were several days that she was really frustrated.”

This training continued to the end of December. Then she was gone! I missed her energy, intensity, motivation and need to be as good as she could be. Then on January 16, 2018 I received a text from her saying that she was officially hired as a SIC pilot for Mokulele and a note saying all the hard work had paid off. The picture above was taken a few weeks later.

Over the next ten months we stayed in touch via text and she would send me images of her life flying between the islands. She was happy and moving closer and closer to her goal of upgrading to Captain.

This image was special because the note she sent with it said that they were being vectored to land on Runway 04 at Daniel K. Inouye International in Honolulu. It made me smile because we had done this very same approach (same visual) during our training in the simulator.

This is a very neat picture of a Blood Moon that she took just after relocating to Hawaii in January 2018. Nice picture of the Mokulele Cessna Caravan.

In October of 2018 I received a text from Catherine asking if I might have some time available in December, because she needed to prepare for her upgrade to Captain. Well of course I did. This time around she had matured as a pilot, and a person. She had almost a year of experience winging around the Hawaiian Islands, based on the Big Island of Hawaii, and knew exactly what she needed to do and how she wanted to approach her training. I really enjoyed seeing how much her confidence had improved and the quality of the questions she was asking. As we bid farewell, after our training I knew she was ready. She was a bit less sure but there was no doubt in my mind that I would be getting a text saying that she had successfully upgraded to Captain.

The smile and four stripes on her shoulders says it all. Congratulations Catherine! I look forward to watching you realize each step of your journey to becoming a Captain over and over again.

As a postscript to this story it is important to acknowledge the role that Catherine’s father played in this part of her journey. It is very expensive living in Hawaii, and we all know that entry level pilot positions do not pay all that well. We all should be so blessed with angels helping us along our path(s) to wherever we are going.