Michael made his first unsupervised solo yesterday and sent me the following note which I am sharing because it captures the essence of learning and realizing that the hard work is worth it.

“I had a terrific time this afternoon–felt like one of the big kids just sauntering in, being handed the book and the keys, doing my preflight, then jumping into the cockpit for a 1.3 hour flight.

I headed for the Ventura shore, skirting the Oxnard airspace and climbing to 3500, where I did some steep-bank turns, slow flight, then some power-off and power-on stalls. (A year ago stalls really freaked me out (to use the vernacular), so I’m delighted that I could do them and do them pretty well, without any apprehension.) Then I headed for Oxnard. I didn’t lose enough altitude before I entered the right downwind (confession), so I went around the first time, then did four landings and taxi-back take-offs. The wind was 180 6-7, so all the landings were crosswind but no sweat. I think I even got the nose more or less straight. Then back to SZP and a descent landing. I think most  of my radio work at Oxnard was fine; at least I didn’t hear about any omissions. You may detect a certain self-satisfaction in the above, but I’m sure you will forgive it.” Not only is it forgiven I applaud you for your success and look forward to our next flight together. 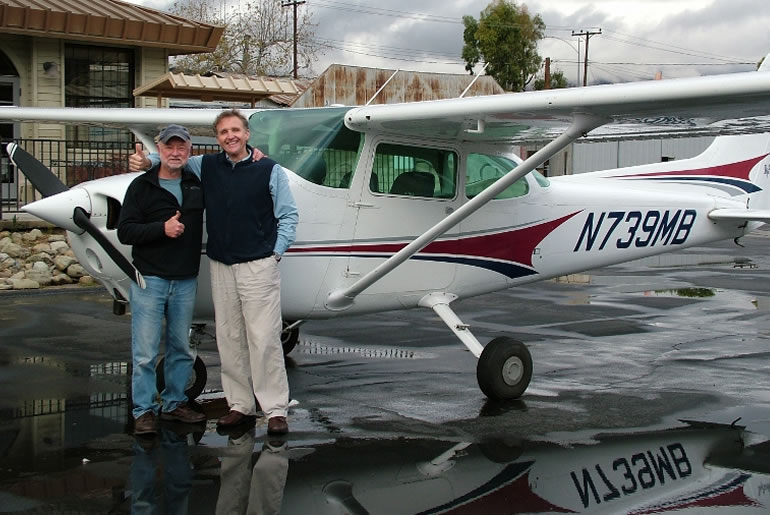 I created this blog to share stories about the people I meet and the opportunity that I have to share the adventure of learning to fly with them. The time that I have spent with Michael O’Connell is time that has been both challenging and rewarding. Michael is an accomplished  scholar with an interest in  Renaissance literature and medieval and Renaissance Drama and a passion for the sea. He is Professor Emeritus at UCSB. The following from the English Department website lauds that  Professor O’Connell’s work as an English scholar, instructor, and Education Abroad Program director has left a lasting impact on the department and campus. “Michael’s 30 years of service to the department and the university at large have demonstrated that his good cheer and friendly disposition extend well beyond the classroom. For his entire career, Michael has been a focused scholar, candid leader, and wonderful friend to his colleagues at UCSB – and will continue to be in his well-deserved retirement.” The “well-deserved retirement” gave Michael the opportunity to pursue an interest in flying which he developed while flying with a friend. Learning to fly in your sixties requires commitment, patience and a willingness to accept the fact that age is both a blessing and a curse. For reasons, outside of his control, Michael had a number of instructors and was introduced to me with a significant number of hours in his logbook. This is not a bad thing but having numerous voices and teaching styles rolling around in your can be confusing. Nonetheless, we started down the path to his first solo flight and what a path it was. The self-described “absent minded Professor” struggled with consistency and I would not have blamed him for saying “I have had enough”. He made it clear that if I felt that this was not for him that I say so. I am of the opinion that as long as a person never gives up, I will never give up on them and he was determined. Michael would make the one hour drive to Santa

Paula week after week and finally on January 23, 2012 he made his first solo at Santa Paula, followed by a solo at Oxnard. Momentous occasions, to be sure, but it was his flight on February 13 that proved to me that all his hard work had paid off and he truly earned the title of Pilot In Command. After three supervised solo flights we will endorse our pilot for unsupervised solo flight. After two solo flights Michael had lost some of his consistency and so we worked through the challenges. The day started with a weather system moving through early and we had a very clear but windy day for the scheduled flight. We had spoken on the phone before the flight and Michael had expressed concern about the winds and we decided to give it a go with the worst case being not soloing but having an opportunity to practice landings with strong winds. Strong winds was an understatement, at Oxnard and Camarillo where we planned to land, winds were 25 gusting to 36 pretty much down the runway but gusty and challenging for any pilot regardless of there skill level. He handled the challenge at a level that I never expected and I had decided that if the winds at Santa Paula were acceptable I would solo him. The winds were not as strong as at the other airports but nonetheless a challenge. After almost two hours of flying I asked Michael if he was up for his third solo and he said yes. Really? I said and he said yes with conviction. He had earned it and off he went for three solo landings. Each presented its’ own challenge but he handled each with a skill level that had come from his persistence and commitment to become a Pilot In Command.

Michael is one of the many reasons that I say “being a flight instructor is the best job in aviation”. I have left a lot out of this post but I would like to share the note that Michael gave to me along with a really good bottle of Scotch which we will share when he reaches the status of Private Pilot. The card had two tanks on it and he penned USMC on one and UC on the other.

“Tanks for blasting away at me from that right seat. Professors aren’t used to Marine platoon leaders-and I recognize that there really aren’t any ex-Marines-but you were exactly what was needed by this professor more used to libraries and
committee meetings. You were-and are-exactly what I needed in this complicated
process of learning to fly. More you’ve become a good friend”.