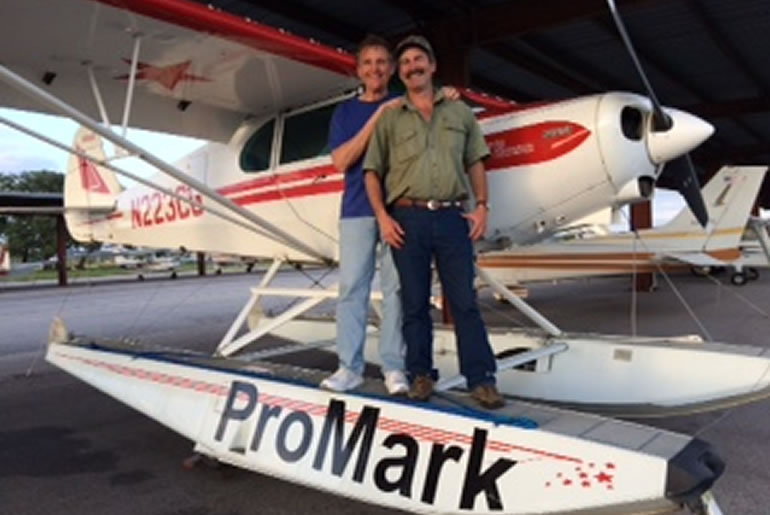 Sunday afternoon. The sun is shining and we passed our checkride.

My passion for flying began when I was eight years old and has been the catalyst for some of the most memorable events in my life.

The most recent adventure involved a trip to Burnet, Texas to add floatplane pilot to my pilot certificate. I was joined by my close friend David Casarez who I had the privilege to teach to fly. We were in Burnet because my good friend and Master Instructor Ken Wittekiend and his team teaches pilots to operate airplanes on the water at ProMark Aviation based at Burnet Municipal airport. 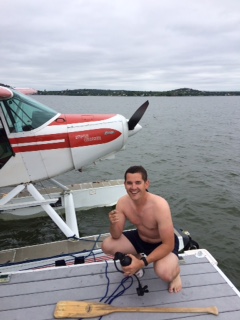 Trace and the ring

Little did we know that when we arrived in Austin, on Wednesday May 20th, that we would have a front row seat to watch the power and viciousness of Mother Nature. During the next four days we would find ourselves looking for breaks in the weather so that we could fly to one of the several lakes in the Texas Hill Country that ProMark uses as training venues for their floatplane training program. Before we arrived in Burnet it was clear that weather was going to be a challenge and I shared this concern with Ken. His reply was simple “we can do it”. I had lived in Texas for ten years and was very familiar with how fickle and powerful the weather can be. Needless to say,  I was hopeful but more than willing to return another day to complete the training. Nonetheless, Ken never wavered and was convinced that we would complete the training and always finished his comments with a smile and the mantra “that we will have fun doing it”. He was absolutely right on all counts. As we sat down for dinner on Sunday night we were floatplane pilots and we had a blast doing it. In addition to the tangible outcome of a Pilot Certificate that states Airplane Single Engine Sea there were other events that occurred during the training that proved, once again, that the journey is as good or better than the destination. 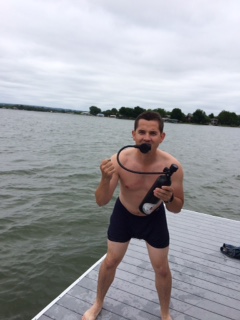 Scuba Diving at Lake LBJ. Trace went above and beyond and below all expectations!

The first event occurred during my first training flight and will forever bind me to my instructor Trace Clinton. During a docking exercise, as I was exiting the cockpit, a very special ring that I had removed because it was in the way when operating the throttle fell out of my pocket and into Lake LBJ. It was disappointing but not the end of the world. Trace was having none of this and insisted on trying to find it. He began stripping down to his skivvies as a boat full of people floated by and wanted to talk about the airplane. We were laughing and joking and then into the water he goes. The depth was only up to his neck and I thought maybe there is a chance to retrieve the ring. Down he goes but realizes he needs to stay down longer. The airplane has an emergency breathing device that can be used should the airplane flip upside down in the water. He grabs it and down he goes again, this time returning with a smile and the ring. It was an “unfathomable” (pun intended) outcome and an incredible act of kindness and commitment to others that Trace shared with me that day. I called Ken from the dock and shared the story with him and told him that clearly ProMark will go to any height or depth to insure that their clients have an unforgettable and fun experience.

The second event was realizing that it had been a long time since I was learning something new in aviation and that I was a “student” again.  With this thought I immediately realized what the people who fly with me feel like and that

I need to be even more patient and kind as a coach and teacher. I shared this with Ken as we flew back to the airport after my checkride; a thought he understood and encouraged.

Thank you Ken, Trace and Jeff for guiding us through the learning, making it fun and an adventure that will live on for years to come